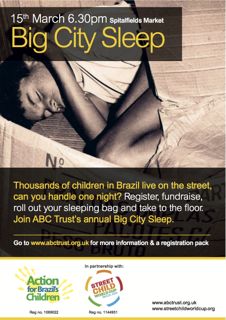 Nobody should ever need to sleep on the street, especially a child. However, on 15 March 2013, ABC Trust will be doing exactly that to raise vital funding and awareness for our work with the street children and most vulnerably young people of Brazil.

ABC Trust's annual sponsored sleep-out at London's Spitalfields Market is back for the 5th year, having raised almost £40,000 to date. This year, in partnership with the Street Child World Cup, we hope to see as many of you on the floor as possible.

With an evening of Brazilian entertainment, including a capoeira performance, a live samba band and a Brazilian dance class, plus a chance to learn more about ABC's work in Brazil, the Big City Sleep is about coming together to show our support and solidarity for thousands of vulnerable children.

We have been really touched by the great effort that so many have made with their fundraising over the past couple of years and always find the atmosphere on the night of the event to be very inspiring.